The birthplace of baseball and Frank Sinatra is also the home of the oldest mechanical engineering school in the country, Stevens Institute of Technology.


Founded in 1811 by Colonel James Stevens, as a quiet resort style getaway across the Hudson, a place where Manhattanites could escape the pressures of the big city. Stevens' ship, the Juliana, was the world's first commercial steam ferry, shuttling vacationers from New York City, across the Hudson River. Once an industrial community, Hoboken was home to Maxwell House Coffee, Lipton Tea and Hostess factories. Now, a residential community, Hoboken's residents include Lenny Kravitz, Natalie Morales, G. Gordon Liddy, Danny Aiello and Super Bowl MVP Eli Manning.


With a walkability rating of 95 (of 100) Hoboken is ranked among the most walkable cities in the United States, parking can be difficult and many residents don't own a car. Hoboken Lackawanna Terminal provides easy access to most NJ Transit train lines and the NYC/NJ PATH provides 24 hour service to Newark, Jersey City and New York City. The NY Waterway Ferry crosses the Hudson River to Manhattan from uptown and downtown locations. Situated between the Lincoln & Holland Tunnels, Hoboken is easily accessed by the New Jersey Turnpike (RT. 95).


As of the 2012 school year, the district's five public schools had an enrollment of 1,730 students and 187.0 classroom teachers, for a student–teacher ratio of 9.25:1. Hoboken is also home to a number of private schools, including include All Saint's Episcopal Day School, The Hudson School, Mustard Seed School, Stevens Cooperative School and Hoboken Catholic Academy.

Stevens Institute of Technology, founded in 1870, is located in the Castle Point section of Hoboken. Comprised of three schools and one college; the Charles V. Schaefer, Jr. School of Engineering and Science, School of Business, School of Systems and Enterprises and the College of Arts and Letters. With a total enrollment of more than 6,400 undergraduate and graduate students, Stevens is a member of the Empire 8 Conference, Eastern College Athletic Conference (ECAC) and NCAA Division III. Stevens is also home to three national research centers of excellence and joint research programs focusing on healthcare, energy, finance, defense, STEM education and coastal stability.


Hoboken has many annual events such as the Frank Sinatra Idol Contest, Hoboken Comedy Festival, Hoboken House Tour, Hoboken Studio Tour, Hoboken Arts and Music Festival, Hoboken (Secret) Garden Tour, Mozzarella Festival and Movies Under the Stars. The Hoboken Farmer's Market occurs every Tuesday, June through October. There are also numerous festivals such as the Saint Patrick's Day Parade, Feast of Saint Anthony's, Saint Ann's Feast and the Hoboken Italian Festival. The Hoboken Public Library & Hoboken Terminal are known for their architecture, the terminal was designed by Kenneth MacKenzie Murchison.


Hoboken has appeared in a number of major media outlets since 1841, when it was the central location in Edgar Allen Poe's "The Mystery of Marie Roget". Most famously, in Elia Kazan's 1954 Oscar Winning film On the Waterfront, Marlon Brando plays a Hoboken dock worker / mob enforcer who utters the famous line "Charlie, I coulda been a contender". In a classic 1960 episode of The Twilight Zone, fan favorite "The Mighty Casey", the Zephyrs baseball team are said to be from Hoboken, New Jersey in a narration by series creator Rod Serling. Today, TLC's Cake Boss is shot on location at Carlo's Bakery on Washington Street and Hoboken is home to the Macy's Parade Studio, which houses most of the floats for the famous Macy's Thanksgiving Day Parade in New York City.

Take in the view of the gorgeous New York City skyline through enormous picture windows overlooking the Hudson River. Enjoy unparalleled amenities that include a waterfront promenade, fully equipped fitness and aerobics center, on-site parking, residents club, business center, on-site cafe, and daily shuttle service to the PATH. Or take an easy ride to all the dazzle and excitement of Manhattan and its world-class choices in dining, entertainment and culture. 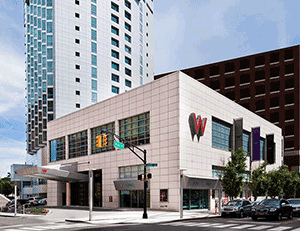 One of the best views in the world, valet parking, world class dining and spa services in the lobby. The condo units at W Hoboken are modern and luxurious, many eastern facing units have balconies with views from the George Washington Bridge to the Brooklyn Bridges.

By registering, you agree to our Terms & Conditions and that real estate professionals from Story Residential Home Search and lenders may call/text you about your inquiry, which may involve use of automated means and prerecorded/artificial voices. Message frequency varies. Text HELP for help or STOP to cancel. You don't need to consent as a condition of buying any property, goods or services. Messages/data rates may apply. Additional information about data use is in our Privacy Policy.